After a first listen to Fortune Favours by North Wales natives, and brothers Connor and Dan Cahalane, I didn't review it straight away. You know how it is, one album comes in, then another, then a couple of singles, then the kids are ill, lol. Well now seems like the perfect time to review the long awaited debut from Faltered.
If you've never listened to the guys before, what you have to remember is that there are only Connor and Dan recording everything. Whilst Dan takes on all the guitar duties, Conner pulls double duty as both drummer and bassist. However, the shortcomings in band members are in no way reflected in the music. What you have, is a great fuzzy mix of great guitar riffs from Dan, with some pounding drums, and some great, sometimes soulfully soft, sometimes metal screamo vocals from Connor, Please Don't Take This The Wrong Way being a great example of the smooth tones Connor has. Where the second and title track, Fortune Favours, shows aspects of the heavier side of the bands music. With the chorus being a heady mix of heavy fuzzy guitars and screamo vocals.
The boys have been criticised lately for being out of time on some recordings and vocals being out of tune, well to this I simply say, in the immortal words, so fucking what!! The vocals may not be perfect, but they're certainly not out of tune! however, this all adds to Faltered's sound. After all, who wants to hear the same manufactured crap record after record!!? I'd far rather listen to a band who have a sound of their own!!
This album has been on the cards for some time now, and as I mentioned, with the 2 Cahalane brothers being responsible for all instruments and vocals, they should be proud of the work they have produced. I for one was not disappointed! 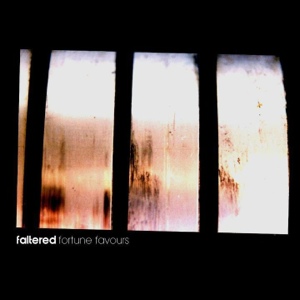