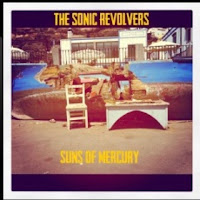 So, this is a first for me, a video review!! I was contacted by the bands frontman, Darrell Tinsley, a couple of weeks ago and asked if I'd ever done a video review. I said no, but there's a first time for everything!!

So here we go.

Plastic Rock is the new single from Runcorn based rock 4 piece, The Sonic Revolvers. It's their first release since joining forces with BritRockArmy buddies, Freaky Pug PR and Records, and is taken from their 'Suns of Mercury' EP.

The video portrays the story of a young guy who obviously has delusions of grandeur, (surely not in this industry!). He's got it all going for him, the flash car, seems to attract the ladies, and plays guitar in a band. But everything is not as it seems. Is our protagonist all he appears to be? Is everything really going as well as it would appear? Well you're just gonna have to watch the video to find out!! (Did you honestly think I was gonna give it all away, lol!!)

The truth is, this is a great little video, for a cracking track, from one very hard working BritRockArmy band! Obviously filmed on a limited budget, it gets it's point across in both a clever and entertaining way. The extras in the gig scene towards the end were recruited via social media, which is a great way to get the fans involved! It definately tells it like it is. The world is full of people driven by their ego. People who think they automatically deserve success because they think they have a God given talent!

P.S watch out for the dodgy looking cleaner towards the end!

Now watch the video below!!