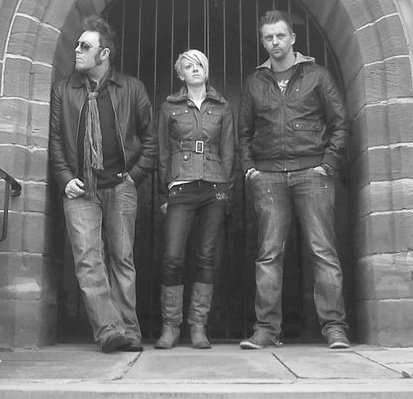 The Fireflys are a 3 piece alt/rock band hailing from sunny Runcorn in Cheshire, UK. They were initially formed in 2007, although the current line up only got together in October of this year. 'Cathedral For Your Ashes' is actually their second album, and was released in February 2012 on their own Canadia records label.
When you press the 'play' button, you are greeted with a great guitar riff intro to opening track 'Ashes (No Revolution)', the albums title is taken from the final line of the chorus. It's a great way to begin, a nicely worked, up tempo number with a great vocal from frontman Lee Wylding, who also proves he's pretty nimble with the guitar with a great little solo midway through. The band draw influence from the likes of The Smiths, REM, and Pearl Jam, the latter being evident in style in second track 'Talking to The Satellite' with great guitar work again from Lee. In truth you can hear references to all these throughout tyhe album. The pace is slowed for the third track, and 'Jenny, Play Your Guitar' takes on an almost bluesy feel, with some sweet bluesy guitar riffs going on inbetween verses. Next is another great example of the smoother side of the bands playing with 'Is He Hurting you' sounding like a hybrid of Eric Clapton-esque guitar hooks, plus, and this is gonna show my age, but it also reminds me a little of a band my mum listened to when I was small, Dr Hook, (think of that what you will, it's my opinion, lol). Throughout the 10 track album, we are treated to just what an acomplished guitarist Lee Wylding is, catchy riffs follow one after the other, and also his vocals show both smooth, bluesy tones, with an edge of rocky huskiness when warrented, 'Bottletop' is a great example of all the aforementioned qualities, and we are only half way through the album. 'Rolling River' and 'Pack-a-Punch' are both good ol' fashioned rock n roll songs with the latter doing exactly what it says in the title and smacking you with a great left/right combo. 'Little Bird' is one of my personal faves, it's got a much more alternative edge to it and is just a great track. 'Dear Emily', which was on the the 2009 debut release, 'Better to Burn Out' has been given the 2012 treatment and has a real bluesy/funk feel to it. And so we reach, sadly, the end, with the beautifully crafted 'Easel'. If ever a track was written to be plasyed live and acoustic, it was this one. With a gorgeous string arrangement in the background, the only way to describe it is EPIC!

Ashes (No Revolution) by The Fireflys

Catherdral For Your Ashes, is a phenomenal piece of work. It's another fantastic example of what is wrong with the British music industry. When work like this goes unrecognised, and 'artist' such as 1Direction, get worldwide acclaim for singing other people's songs and taking all the credit!!