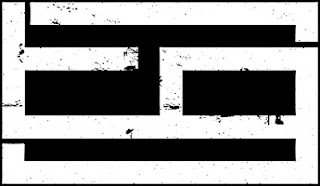 The latest Q&A is from a band who make what I would perceive to be 'marmite' music. You either like it or you hate it. Now that being said, I'm gonna do another piece on these guys in the next week or so, after I've had a proper listen to their album 'Forgive Me'. The reason for this is because I'ver gone into it with the mindset 'I'm not going to like it, and nothing will change my mind!' But something has happened......and I'll leave that there :)

The Gifted are an 'industrial' rock band from Sheffield, using all manner of wizardry and magic to produce some great results. Here, bass player Izzy answers the questions.

1 Please introduce us to the members of the band.
I'm Izzy, i play bass and make a mess. Andy sings and plays the guitar and we have Gennie on Keyboards and synth.


2 What musical genre would you say you fit into best?
We like to be as pretentious as possible,so we call ourselves post-industrial rock.
3 Who are your musical influences?
Nine Inch Nails, Marilyn Manson, David Bowie, Tool, Type O Negative, Manic Street Preachers, Big Black and White/Rob Zombie.
4 How did you get together as a band?
Andy had The Gifted going for a while before he met me, our eyes met and we knew he had to have me playing bass. I do think we are a good team though.
5 If you could collaborate with anyone, past or present, who would it be?
Trent Reznor. Andy could die happy if that happened.
6 Would you rather play arena gigs, or smaller intimate gigs?
We like the smaller gigs for the crowd interaction and general larking about, but arena gigs could buy us more guitars.
7 If you could play any venue in the World, where would it be?
I personally have always wanted to play Madison Square Garden.
8 Where do you see the band in 5 years time?
Being a cultural icon.

9 Signed or independent
We are currently doing everything ourselves.

10 What's been favourite gig you've played, and why?
Whitby Goth Weekend, it was imense.
11 What has been your worst gig experience?
I won't name the place but it was a total shit hole with chavs fighting at the bar. Awful gig.
12 If you could cover any song, what would it be and why?
Hip to be Square by Huey Lewis and the News
13 What song would you like played at your funeral?
AC/DC - Highway to Hell

14 What song would you/did you have as your first dance at your wedding?
I am not married but i would go with Love You To Death by Type O Negative.

Thanks to Izzy from The Gifted for answering the questions. Below is the video to the bands single 'This Makes Me Feel Alive'. Give it a listen, NOW!!