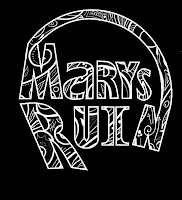 The first thing that hits you when you listen to West Yorkshire's Mary Ruin, is the overwhelming thought that something has been missing from your life!

From the opening riffs of Killer, there's a feeling in the pit of your stomach, "and now my life is complete!" It's a real return to classic old school rock'n'roll music, from a band formed in April this year, from the remains of a previous band. The intro to Killer almost makes you feel like you're going to be listening to something far more indie based than you actually get. It's not until Jason Roberts' distinctive voice and driving rhythm guitar kicks in that your bought back to some serious rock. This is any hardcore headbangers dream of a track.

The gritty, gravel-strewn tones of Jason Roberts' vocals are what someone like Joe Cocker would sound like if he sang in a rock band, with an almost soul feel to them, shown particularly in Whiskey Train. From the slow, driving guitar and harmonica intro, Whiskey Train feels like you're riding the diesel locomotive from the title. The solo's are real face melters, with 'slug' and Chris Dover on guitars, in damned fine form! It's a great rock track.

I'm very much looking forward to whatever future material the guys come up with. If these first two tracks are anything to go by, any 'old school' rock fan is gonna be in for an absolute treat.