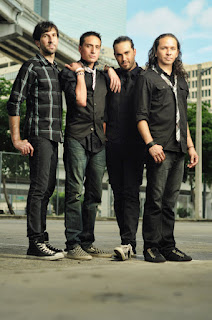 The latest Q&A comes from an international band that was featured a couple of weeks ago. I am both honoured and excited that they've taken time out of their busy schedule to do this.

From Miami via Puerto Rico, Message To Venus are really making a name for themselves lately. With a song featured in a new Puerto Rican horror movie and a nomination for a prestigeous Latin Rock award, the sky really could be the limit, and world domination just around the corner!


1 Please introduce us to the members of the band.
Jandre Nadal: Vocals and guitar John Feliciano: Guitar Edgar Ramos: Bass JuanMa Font: Drums
2 What musical genre would you say you fit into best?
Jandre: The band is Active Rock, I'm exotic rock.
3 Who are your musical influences?
Jandre: Deftones, Led Zeppelin, Soudgarden, Bob Marley, Depeche Mode John: Tool Edgar: Level 42, Sting, Tears for Fears, Dream Theater, Killswitch Engage to name a few :)
4 How did you get together as a band?
John: We've know each other for many years from playing with other bands in the Puerto Rican local rock scene. While Edgar, JuanMa and I were recording an album with our previous band we found ourselves without a singer. At the same time Jandre found himself without musicians for a project he was trying to get going. That's when producer Leo Alvarez suggested we invited Jandre to the studio to lay down some vocal tracks. His voice fit perfectly with the music and we've been together ever since.
5 If you could collaborate with anyone, past or present, who would it be?
Jandre: I'd get Damian Marley, David Gilmore, Omar Rodriguez-Lopez, The Edge, Neal Pert, and Rocco on bass.
6 Would you rather play arena gigs, or smaller intimate gigs?
Jandre: I think smaller venues are much better because of the ease of interacting with the crowd, like theaters. Edgar: But we'll play wherever our fans are willing to go and enjoy a great show.
7 If you could play any venue in the World, where would it be?
Edgar: Wembley Stadium ;) John: O2 Arena in London Jandre: The Red Rocks Colorado, and anywhere in Japan because they seem so welcoming and hospitable.
8 Where do you see the band in 5 years time?
John: Working hard and touring the world. Jandre: Album going platinum and sold out tours worldwide with other great bands. 9 Signed or independent John: We are currently independent. Keeping our options open.
10 What's been favourite gig you've played, and why?
Edgar: I would say the Coors Light Indie Fest in Puerto Rico; it was an amazing show and we got a true taste of our true fans. :)
11 Where's the worst venue you've played?
John: No worst venue thus far with M2V. With previous bands, the worst venue always is the one where you get the police called up on you because of the loud noise. LOL
12 If you could cover any song, what would it be and why?
John: We have a really cool cover of Depeche Mode's "Stripped". We decided to do that song cause first, we love Depeche Mode's music and second, because we wanted to cover a song that our version would sound very different from the original because of the instrumentation. Jandre: I'm going to try to convince the boys to do Pink Floyd's "Comfortably Numb".
13 What song would you like played at your funeral?
Edgar: "To Smile" by M2V John: "My Way" by Frank Sinatra Jandre: "Wild Horses" by The Rolling Stones or "Three Little Birds" by Bob Marley
14 What song would you/did you have as your first dance at your wedding?
Jandre: "Have You Ever Really Loved A Woman" by Bryan Adams Edgar: "When We Dance" by Sting John: "Sway" by Michael Bublé in a cha cha cha version.

Well there you go, an internatioonal bands take on the world of being unsigned. Again, massive thanks to Message To Venus for taking the time to be part of BritRockArmy