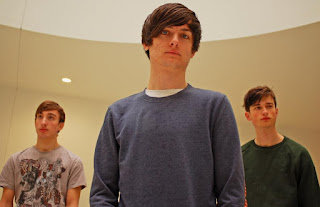 Keep The Change are a young pop/punk/rock band from the West Midlands. They've been together for just over a year, first deciding to make music in March of 2011. They write a lot of their own material and have built up a solid collection of tracks for performing at their many gigs. Since first forming, they have played more than 60 events around the West Midlands and Warks and have built up a soilid fan base.
They've released an EP of 3 great, catchy, punky tracks a la Busted/Green Day, etc that you can listen to on their Facebook page. You can also request a copy from them via email, details are also on their FB page. they're a great prospect for the furture and have already received rave reviews for their live performances, and for the EP, called Until You're Gone, including this one from Loud-Stuff.com.
They EP kicks off with probably the catchiest of the 3 tracks called Hang It Up, which is a great example of they song/music writing skills, it flows at just the pace a catchy, almost McFly/Busted style, (but better!), track should and would, the sort of thing you automatically feel your foot tapping to. The second track, Parachute, steps up the pace a notch but is also a great tune. The third, and title, track Until You're gone, allows the lads to show off their heavier side with great guitar riffs from Matt Williams, and a great vocal from Will Inns. It's a cracking first EP from this band of young 'uns, great songwriting, great music performances and three solid tracks are the result.
Give it a listen, give 'em a follow on Twitter, and give 'em a like on their Facebook page. Also look out for them playing in a town near you in the future, I've got a feeling, the UK beckons.
Keep The Change are:-
Will Inns - Vocals and bass
Matt 'Stumpy' Williams - Guitar and backing vocals
Tim Sillars - Drums