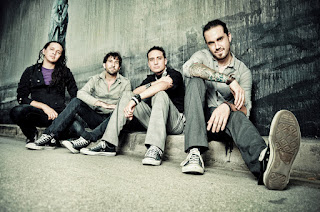 Ok, so it's time for another look at the worldwide phenomenon, that inexplicably leaves amazingly talented bands and artists unsigned.

This week I'm going to share with you another band I found through Twitter, but I didn't discover them, (if I'd done that, I'd be a very rich man by now :-D). They are Message To Venus, hailing from sunny Miami, Florida, via Puerto Rico. They're another band who produce great music, through tight guitar work, fantastic vocals and alround fecking quality.

I first heard them in around april this year, I don't know how they came to my attention, I'd never heard of them before. But on first listen to The Show, I was hooked. That hooked in fact that I downloaded their most recent EP The Envelope. It's 5 tracks of greatness. If you imagine a mix of Alice In Chains, Led Zep, Linkin Park and others, then you come somewhere close to the sound these guys produce. Yet, it's a sound that is also unique to them.

Have a listen to a couple of the tracks, have a watch of a vid and judge for yourselves. But when have I ever been wrong, lol. OK, don't answer that one :)

Update - 09/09/12
Since this piece first went out, I've received 2 emails from Message To Venus' management company. The first one stating that the band had been nominated for a prestigious Latin Rock Award in the Slam Alternativo/Rock category. The ceremony takes place in the home country of Puerto Rico on September. BritRockArmy wishes the guys the very best of luck in this. They've got a great chance of walking away with the award!

In other news, the most latest piece of news to come out of Camp M2V is that their debut single Cold & Grey has been included on the soundtrack for the Puerto Rican produced horror film Unknowns, the band attended the movie premier this last week on September 6th. Once again, massive congratulations to the guys, thoroughly deserved!!