Now, I know it was sometime ago, but this the the first gig I'd been to in 3 years, I'd been waiting for months to see Euphoria Audio, and I now have the platform to tell people all about it.

After  driving for 2 1/2 hours from Birmingham, we got to The Cockpit just before the doors opened. Now, if you've never been to the venue, it's actually 'inside' a railway bridge! Don't ask me how, or why, it just is. It's a nice venue with a bar area leading through to a long narrow room with the stage at one end.

The gig was a heat for this years Futuresound competition, where 5 bands win the chance to play at this years Reading and Leeds festivals. This heat saw Euphoria Audio, Ourfamous Dead, The Spectre Effect, and Stations battling it out. 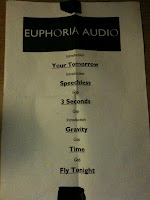 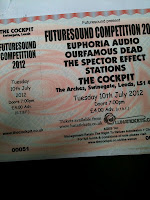 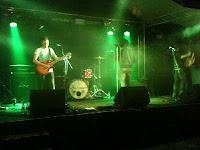 Before the bands started, Ben Lloyd (Lloydy, guitar), and Matt Shirtliff (Shirty, vocals), from EUAU came out and had a chat while they were sorting the last few bits out, But at 7:30pm it was time for business. Each band played for about half an hour, and EUAU kicked off their 6 song set with a new song called Your Tomorrow, it got the set off to a fantastic start, and it got even better with the next 3 songs, as they're my fave Euphoria Audio songs. Speechless, 3 Seconds, and Gravity had me singing at the top of my lungs, until I turned around and realised I was the only singing apart from Shirty! but Hey! I was enjoying myself :) Next up was a song called Time, which although I was aware of I hadn't heard it as much as others, along with the final song of the set, Fly Tonight. the latter of the 2 is an absolute cracker, that gives Shirty the chance to show off how truly fantastic his vocals are. The band play as such a tight unit, you can tell that they must be friends away from the stage too. This became more apparent as the other bands played, all of whom seemed like groups of comparitive starngers when they were on stage. The guys from Wakefield put on by far the best display of the night, followed closely by Stations, who I'd been totally unaware of before that night.

If you get a chance to get out and see Euphoria Audio at one of the current gigs, do it! You will NOT be disappointed.