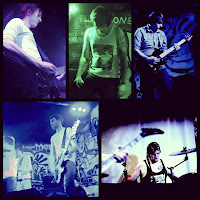 The second of our Q&A victims, is Destroy The Skyline's bassist, Danny Smyth. For those of you unfamiliar with these guys from Yorkshire, firstly, they're a great band playing awesome music. Secondly. they're on the line up for the BritRockArmy Presents gig on March 14th 2013.

2 What musical genre would you say you fit into best?
We've been having this discussion recently and we came to the conclusion that we're too unpredictable to be put into a genre. We just write whatever feels good.

3 Who are your musical influences?
Our influences range from Parkway Drive and While She Sleeps to Deaf Havana and Brand New

4 How did you get together as a band? Well, Ryan, Dom and Jamie all knew each other through school and previous bands that they'd been in. I met the guys through a mutual friend who mentioned she knew of a band starting out and asked if I was interested. And as for Joe, Jamie met Joe in the toilets at the squash club in Dewsbury, then we brought him to a practice and have never looked back since.

5 If you could collaborate with anyone, past or present, who would it be?
I'd love to do a song with Myles Kennedy from Alter Bridge. That guy has such an amazing voice. I saw some live footage of him and slash at Download a few years ago and his voice sounded just like the recordings.

6 Would you rather play arena gigs, or smaller intimate gigs?
We love playing any gig! The size of the venue isn't all that much of an issue. Don't get me wrong, we'd love to be selling out huge arenas. But, we just genuinely enjoy playing our music to any size crowd.

7 If you could play any venue in the World, where would it be?
I'd love to play at Download Festival at Donnington Park. Would be such an honour to play on the same stage as some of the worlds greatest bands.

8 Where do you see the band in 5 years time?
In 5 years time I see us still writing music together and still enjoying every show that we play like its our first. Hopefully our portfolio will be a few albums heavier by then though

9 Signed or independent
We're currently independent. Our eventual aim is to get signed though (hopefully)

10 What's been your favourite gig you've played, and why?
My personal favourite gig was at The Old Turk in Dewsbury a few weeks ago. The band that were on before us were amazing and those guys knew how to put on a show! Initially they had us a little scared, we were all just like "sh*t! We have to follow that! Then we got on stage and the boys pulled out all the stops and we put on a show like we never have before. That gig made me realise that no matter what we're faced with, we'll always pull through. Couldn't be more proud of all the boys in Destroy The Skyline.

11 Where's the worst venue you've played?
I'm not going to name the venue but there's one particular venue that none of us like playing at. It's not really a bad venue and we supported Silent Screams there, (truly amazing band) we just don't like it because we've played there countless times and it never sounds great.


12 If you could cover any song, what would it be and why?
We were thinking about perhaps covering a Justin Bieber song, unsure as to which one yet. But we figured that his songs are catchy and we can only make them better with our own twist on them.

13 What song would you like played at your funeral?
It's not really something I've put much thought into really. I'm only 21 and I'm hoping that my time won't be up anytime soon. I think at the moment I'd have to say "for contradiction" by Destroy The Skyline, I realise that was a bit of a shameless plug, It's one of my favourite songs at the moment and what better way to send someone off than with their own music.

14 What song would you/did you have as your first dance at your wedding?
I'd have "the girl" by City and Colour as my first dance, I regularly sing it to my girlfriend and it has a lot of sentimental value.

Thank you to Danny for answering the questions.