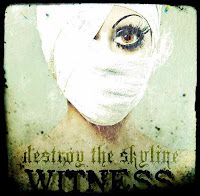 Destroy The Skyline are a band who are pretty difficult to pidgeon hole as one particular genre. Their music has elements punk, metal, there's a bit of screamer in there, some thrash metal, and a bit of classic rock. but what you do have, in Witness, is a bloody good EP, bursting with character, brimming with confidence and sounding like something produced by a band that have been around a hell of a lot longer than this bunch of guys from Yorkshire have been.

We kick off with 'Legacy', with it's wicked riff beginning and heart pounding drums, we get a vocal that can be compared to the like of Dead By April, Five Finger Death Punch, and those other bands that so greatly combine a smooth vocal with the screammer. This EP will certainly be a huge part of DTS' legacy. Next up is a track that has been kicking around for a while, and been received very well by fans and other. 'For Contradiction' is a fine example of the bands 'gentler' side (if they really do have one, lol). It's very akin to some of Linkin Parks ballad-esque tracks, with the sort of melodic feel you could easily hear coming from Chester and the LP boys. The final track 'Rest in Pieces' is a cracking way to close the EP, it kind of blends elements of the other 2 tracks molding into a mash-up of Linkin Park beats, and FFDP vocals. It's an angry track, thats for sure :-)

It's a great EP, one which will please all DTS fans, and even people who may not be fans, if you like bands like previously mentioned, the likes of Dead By April, FFDP, Linkin Park, give these guys a listen, you will not be disappointed!!