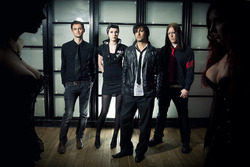 You'll notice lately, that a lot of the bands I'm featuring on the blog are very new bands. Ones that more of you will be unfamiliar with, than familiar with. Black Sixteen are no exception to this. I only picked up on them a couple of weeks ago myself, as usual, via Twitter.

They're a four piece band from London who formed in 2010 when songwriter and guitarist Amir Khan, and drummer Matt Burn got together using the temporary name 'Rain Hits Concrete'. The quartets line up was completed in early 2011, when Amir and Matt were joined by bass player Alex Brock and keyboard player Laura Sepp. The band however, still needed a front man, and it was Amir who stepped into the breach as the songs the band had collected had evolved to be very personal to him.

Influenced by bands such as Nirvana, The Afghan Whigs, Ministry and Nine Inch Nails, the newly confirmed and renamed Black Sixteen set to work on the debut EP, which was released at the beginning of 2012.

The self titled Black Sixteen EP is a cross section of many different rock styles, with a bit of punk, a pinch of grunge, a smattering of classic rock, and a whole lotta attitude. It's a 6 track offering, with 'Die For Me' kicking things off. It's a song that starts off with a good grungy guitar riff, which then blends into an almost distant vocal for the verse, but then transcends into a dark and angry chorus. Amir shows off a multi faceted vocal range which see him go from an almost gentle verse into a FFDP style chorus. It's a solid way to start off a debut release. 'Kira' follows which has a much moodier feel to it, with almost sinister, gothic overtones to aspects of the vocal and instrumental performance. As with a few tracks on the EP 'Choke' has a very dark punk/gothic feel to it, very akin to Marilyn Manson, although there are more melodic aspects to track 3 too. Again, much like someone with a split personality, Amir switches 'character' in the blink of an eye from a gentle, almost tortured soul, to the one doing the torturing. It's another really strong vocal performance which is carried over into 'Nude Model'. You could almost be forgiven for thinking 'Red Light Princess' is a change of pace, as the intro begins life as an almost lullaby-esque keyboard intro, however at the 30 second mark, if you're worried you may drift off, have no fear as the drums that kick in are a massive wake up call, and you are dragged back to exactly where Black Sixteen want you. Held captive by the thought of what is to come next. Kick has an almost industrial feel to it, with the way it is built up in layers from the intro, and with the final offering Ghost Kiss the EP is brought to a fitting end, with another powerhouse vocal performance from the ever dark Amir and a great keyboard track from Laura, giving aspects of the song an almost 80's feel.

All in all, its 7 angst ridden, angry tracks, with an order of bitterness, over a range of grungy, punk like riffs and great keyboard work floating in and out to give some tracks an all together different feel to what you would expect. It'll be interesting to see where Black Sixteen's sound takes them in the future, with what they currently have, it could go in one of many very interesting directions. I for one wish them luck, and will be monitoring their progress very closely.

Die For Me by blacksixteen
Posted by Unknown at 22:23