Where Are All These Bands Coming From!!?? 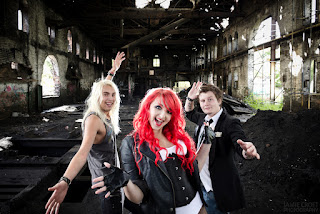 When I started BritRockArmy, almost 6 months ago, a lot of bands were spread across a big area. London, The North West, and South West seemed to be home to most of the bands that I was coming across. Not all that surprising really, over the years, these places have given us a hell of a lot of great bands. We've obviously had the Liverpool/Manchester era's, The Beatles, Oasis, Stone Roses, Charlatans, etc. While London and the South have given us The Rolling Stones, The Who, Pink Floyd, and the entire Mod scene.

But until recently, it seems like some people, including me, forgot where the birthplace of rock/metal music is. When you think of Birmingham, a lot of people think of funny accents (sorry!!), loads of (dodgy) football teams (sorry!!), and possibly the home of chocolate, Cadbury's. (Well I do anyway :-D) True rock music fans are however guaranteed to mention 2 words when you say Birmingham. Ozzy and Osbourne. The Black Country was of course the birthplace to the real Prince of Darkness, and lead singer of the legendary Black Sabbath. Through the early days of metal, The West Midlands was like a factory for great bands.

But then, it all seemed to go a bit flat, peoples musical tastes changed, as metal bands evolved, they became more contoversial, doing more and more shocking things on stage. London became the more affluent city when it came to producing, not all, but a lot of the music people were listening. Further down the line obviously, we've had the introduction of 'talent' shows, (and I use that term very loosely!) Pop Idol, Popstars The Rivals, The X Factor, BGT, and however many other sleights on musics name you care to mention.

Well it would seem as though the tide may be turning back. whilst on my journey with BritRockArmy, I am noticing just lately, how many fantastic rock/metal bands there are in Birmingham and the West Midlands, and indie/alternative of course!! Bands like Shotgun Sister and Crooked Dawn, both booked to play for BritRockArmy in the future. The fact that nearly a third of my bands on Twitter are from Birmingham or the West Midlands says a lot for the current state of the West Mids music scene, and I for one, am very excited about what the future has in store for these great bands.

Sister Shotgun - Riots! by SisterShotgunUK
Posted by Unknown at 14:03