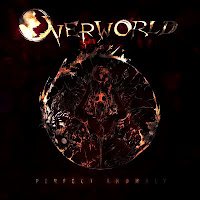 For this weeks International artist, we've flown in the oposite direction to previous weeks. We find our band in the land that bought us Henrik Larrsen, Ulrika Johnson, and a muppet chef!

From Sweden, we have an adrenaline fuelled roller coaster metal ride, bought to us by Overworld. They're a young band hailing from Stockholm, and formed in 2011. Although a young band, the 5 members are not that new to the music scene as they all came together from other familiar Swedish metal bands including Still Echo and Kyrielle. Since coming together they have been widely recognised for their amazing live performances and the interaction with an ever broadening fanbase.


With their debut EP released in May of this year, it took Sweden by storm, rocketing to the top of the country's iTunes chart. This happeing despite the fatc that the EP was totally self released, as the band are at this moment unsigned to a recording contract.

Now, I'm gonna be honest and say I'm not a huge fan of the 'screamer' style vocal. Having said that, Until We're Dead is a great opening track, and for fans of the genre, there is very little to be disappointed with if you listen to the whole EP. The vocals are done in a Dead By April style, so a great mix of smooth crisp vocals and the roaring harshness of the 'screamer'. but the vocals create a sound that kind of offers similarities to the afore mentioned DBA, and also, to a degree Five Finger Death Punch, yet still offers a sound that is unique to the band. The guitar work is top notch, with great solo's in amongst the tracks.

If you like your metal, loud, hard and extremely heavy, then you'll love this, as it is a great piece of work in it's genre. They deserve a much larger worldwide fanbase, as they prove with this first release that they can definatley hang with the big boys (and girls ;D).