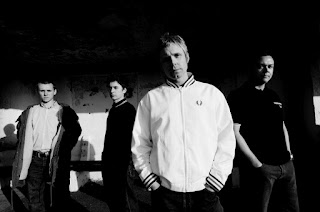 "As sharp musically as they are in attire, Liverpool quartet The Universal apply timeless values of upbeat melodic British rock songwriting to a sharp-dressed 2012 model."

It's certainly not just the dress sense that's pin sharp with these guys from Merseyside. The Universal's music is bursting with enough quality to make a Saville Row suit. Like a guitar driven mix of Paul Weller, Oasis, Ocean Colour Scene, and The Reel People, you cannot help but be impressed by the four pieces musical prowess. With  Terry Shaughnessy pulling, as well as strumming, the strings, his songwriting equals that of Mssrs Weller and Gallagher, (big boots to fill!!), and thats as well as singing and playing guitar. Is This England is almost a tribute to what the British music and other industries used to be, before the likes of X-Factor (excuse my language) became such an unfortunate influence on todays record sales. Satellites is a much slower but equally strong track. I  fact, I'd stick my neck out and say that there is not a 'weak' track that I've heard.

It's difficult to say anything else other than to stronlgy advise you check these guys out as soon as you can, like NOW!!