Promethium - Welcome to The Institution 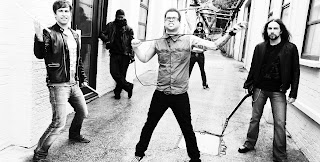 Now, I've said on twitter on more than one ocassion that, if you like your rock loud, heavy and ass kickingly good, you can't go far wrong with Promethium. Between the 5 members, they have over 70 years experience in the studio, on the road, and promoting their work. (funny, they don't look old enough! lol). The Metal Meisters from Lancaster have honed their skills and this is evident in their live shows, where they are energetic, unpredictable, and above all else entertaining!!

They formed from the break up of 5 metal bands in Lancaster, and released their first EP, Tribute to The Fallen, in 2009. This received much radio air time from underground metal stations, and was the talking point of many a reviewer. In 2011, the followed up the success of this release, with their debut album Welcome to The Institution. Which is what I find myself crunched in the middle of now, lol. I finally managed to get my grubby paws on a copy and in the time its taken me to write this so far, i've listened to it fully twice :) For heavyness, it's about my limit, for quality as Wayne and Garth would say, "I'm not worthy!" From the very start we're treated to awesomeness. With Distant Illusion, we're kind of drawn into a smooth instrumental, with a soft guitar from Dan Lovett, a smooth basline from Wayne Ward, and cool drums from Fraser. It's a fine introduction to a great album. Visions is next, the track that introduced me to Promethium. It's a frantic, emotional, almost fearful track. The vocals from Gary Mcgahon, pull you in, he sounds almost fearful of the visions the song is about. Again, it's full of great guitars, fine solo's and is still my favourite metal track for some considerable time. Meaning of Trust sounds like early Metallica with driving guitars, and a thumping drum beat. The pace then slows, into Nothing. The intensity is still there however, especially in the bitter sounding chorus, where the lyrics almost spit out like a poisonous snakes venom.

Tribute to The Fallen, is a kickass song, driving guitars, pounding drums, killer solo's, emotive lyrics, with a message. Once again, the pace is slowed for 33.1, a chance for Gaz to show the delicate side to his voice, ok so only for part of the song, but it shows what versatility he has. Filled with killer bass, kickass solo's, and again, although emotion isn't necessarily something you associate with the metal genre, there's an emotive tone to Gaz's voice. Cycle of Vengeance has a vengeful feel to it, again transmitted through the vocal performance, the same goes for the rest of the album, Trapped, The Curse, and Murder Inc, the final 2 tracks being written by Gary, himself. This is easily one of the best metal albums I've heard. Massively underated, unmentioned, unrecognised, and above all else, unfair! That Promethium haven't had some serious recognition for this work is criminal. It's a fantastic album, if you haven't got it, get it, NOW!!!