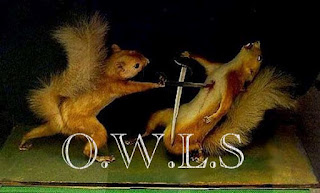 "feedback, bang & crash, shouting in tune, make with the funny, no precision solos or fireworks"

Yep, that pretty much sums it up. Thank you and goodnight.

Only kidding. I'd be doing this recording a huge disservice, if I didn't at least say a little more about it. Firstly, this is the first release from O.W.L.S, called The Rite of Spring. It was released on an unsuspecting public in April of this year.  Calling it an EP is also a bit of a disservice as, at a cool 7 tracks it's more like a full album.

From the first track, A Day At The Beach, we are left in no doubt of what to expect from the rest of the tracks. With a vocal combining elements of early Beck, and the mighty Kurt Cobain, it sets the stall out perfectly. The second track, Hurt Janine, is as good a track as any by either of the aforementioned artists. The truth is, this EP is almost like listening to a cd of Nirvana B sides. Now thats not meant to discredit the work in anyway, far from it! what I mean is that every track would fit perfectly with anything that Nirvana did, or any other band of their kind.

With the relentless storm that is Kibosh, to the much calmer waters of Vitamins (kind of), Tobe MacFarlaine shows that unlike a lot of other singers in bands of the ilk, he has a lot more versatility, and richness to his voice.

It's such a nice feeling when a band you've not really had the chance to listen to before, present you with their work, and when you listen to it you think, WOW!! This was one of those occasions. If you've not had chance to listen to O.W.L.S before, and I don't mean, stick your head out of a window and listen for distant Hoots, have a listen to these guys, you will not be disappointed. You can download it from iTunes and also from Amazon and HMV
Posted by Unknown at 15:30