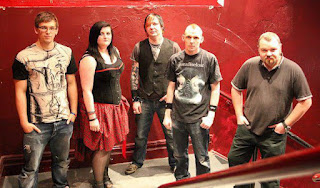 Screams of Cold Winter are one of those bands that so perfectly combine a metal/rock backing, softened by a female vocal that gives each track that slightly less 'threatening' edge, but turns it into something totally different. In a way it turns hearing each song into something more like listening to a story. Imagine something along the lines of Within Temptation but with a vocal sounding more like Amy Lee. Wasted Memory is a great example of this sound, with Sarah Loftus giving a powerhouse performance on the vocals.

The band, who hail from the UK's Las Vegas, Blackpool, first formed in Preston in 2007, however, the line up has changed significantly from this first incarnation. The present line up only got together in January 2012, when after a brief hiatus, 2 founding members, Spike McKay and Paul Shepherd, were joined by new vocalist Sarah Loftus, and Brian MacDichian and Justin Clack on bass and drums respectively. Paul had originally played synths in the original set up, but he made the move to guitar in the new band, changing SOCW's sound into something with a more alternative/metal feel. This new sound has been received well throughout the local gigs the band have played during 2012, and they are currently recording a 'debut' EP which is set to be released in early 2013, closely followed by a series of dates throughout the UK.

I'm a big fan of female fronted rock bands as, like I mentioned before, I think the female vocal gives and entire different feel to the songs. I'm looking forward to hearing stacks more from Screams of Cold Winter, and who knows, maybe a spot on a BritRockArmy live event is on the cards :)
Screams of Cold Winter are:-
Vocals - Sarah Loftus
Guitar - Spike McKay
Guitar - Paul Shepherd
Bass - Brian MacDichian
Drums - Justin Clack