Skeleton Kid - Live at The Adam and Eve Birmingham

To say I entered The Adam and Eve with slight trepidation last night, is a bit of an understatement, lol. When you pull up outside a venue, and all you see milling around are punks with mohawks, leathers, and cans of Red Stripe, it kind of makes you wanna stay in the car, lol.

That's when I noticed, standing a few feet away from the gig goers, the tall figure of Timmy C and the blonde hair of Frankie G, singer/bassist and guitarist for Skeleton Kid. The punk rock band from Bournemouth, who had travelled all the way from the south coast to entertain an unfortunately small, but none the less enthusiastic crowd, in this back street Birmingham rock bar.

And entertain is exactly what the guys did! From the opening riff of Rock Her Bones, you were left in no doubt that these boys meant business! Timmy on bass, Frankie on guitar, Eddi J on rhythm guitar and Rusy Olli bashing hell out of the drums, blasted their way through a 30 minute set including Watch Me Bleed, a superb cover of Mötley Crue's Kickstart My Heart, brilliantly sung by Frankie G (who'd of Thunk it!!), and ended with a great performance of the track Skeleton Kid. The guys showed that no matter what size the crowd, their energy and enthusiasm is always on overdrive, with great banter between Timmy and Frankie, and the ability to decide what tracks to play, on the fly. It was great to finally get to see these guys live, the gig was originally scheduled for last month but due to an important member of their crew being ill, (ok, so their tour van was dead!), it was also great to have a chat with Tim after the gig, to say hi, grab a signed EP, and have a quick chat about the charity gig in March, and Skeleton Kids massive gigs coming up! 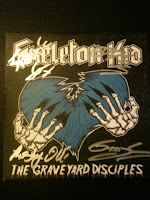 If you get a chance to see the boys from Bournemouth, in a town near you, take it!! You won't see many punk rock bands put on such a polished, enthusiastic, energy filled performance.

The EP, The Graveyard Deciples, is available now.