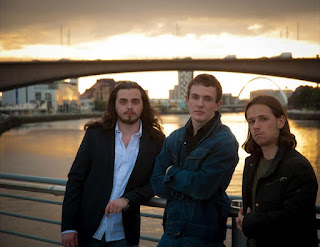 This weeks Q&A is from Scottish 3 piece, Mercury Underground. Drawing influence from the likes of Deep Purple, Led Zepp, Living Colour, and Foo Fighters, this is a bunch of Glaswegians making a name for themselves in all the right places. Having played venues such as Camden Underground in London, and also the world famous King Tuts in thier home city, they've also supported acts such as Voodoo Six, Attica Rage and The Sword during their tour with Metallica.

They released the debut EP in May this year.


1 Please introduce us to the members of the band.

2 What musical genre would you say you fit into best?

I think we would fit into the Classic Rock category best, we have a broad variety of influences which can take us in many directions however our main style and influences are rooted in Classic Rock music.

3 Who are your musical influences?

We have so many influences collectively that it would take forever to list, however some big influences on the band sound as a whole would be bands like Rush, Deep Purple, Led Zeppelin, Black Country Communion, Guns N Roses, Toto, Van Halen, Foo Fighters, Living Colour, those are most important ones which come to mind and the list goes on and on from there.

4 How did you get together as a band?

I (D.R) started the band in high school many years ago, at that point going under a different name and Bradley (our bassist) joined a few months after that and has been in the band ever since, we have been through a few different drummers with our latest and newest member, Robert Shearer just joining a few months back but he has been a great fit for the band and he plays great.

5 If you could collaborate with anyone, past or present, who would it be?

Personally I would love to collaborate with Ritchie Blackmore or have worked with Tommy Bolin, both are massive influences on my guitar playing and two of my all time favourites. As a band it would be amazing to collaborate with Rush because we have always massive fans and to us they are the benchmark for where we want to be as musicians.

6 Would you rather play arena gigs, or smaller intimate gigs?

Definitely Arena gigs, playing at arena/stadium level is our ultimate goal and I'm sure every rock band would say the same thing. There is nothing wrong at all with smaller intimate gigs, they can be great but playing in arenas has to be the thing to strive for, we can only imagine what it would be like to play in front of thousands of fans who are there just to see you play and hopefully we get to experience that one day.

7 If you could play any venue in the World, where would it be?

That is a tough one but I think it would have to be the Budokan in Japan. It is such an iconic venue in music, rock music in particular, so many great bands have played and cut live albums there, it seems like you have really made it when you play the Budokan and the fact it is in Japan as well which is a dream country to play in for us. Aside from that it would have to be somewhere in America.

8 Where do you see the band in 5 years time?

We just want to make a living in music and get our music out there for people to enjoy but in all honesty hopefully in 5 years time it would be great to have a few albums under our belt, gold or platinum certified in many countries preferably haha, along with a few big tours, a large fanbase and everything else that comes with it. The business is tougher than ever these days so all of that is easier said than done but you have to shoot for that or else there is no point.

Independent is good for established bands with strong fanbase behind them and previous success, also for creative control or for bands with a DIY ethic however in my opinion to be successful in a band of our style you have to be signed, to become more successful than the average band it calls for a lot of support from a label in areas like promotion, recording, touring etc.

10 What's been favourite gig you've played, and why?

Our last gig supporting Adrenaline Mob and Voodoo Six at King Tuts Wah Wah Hut in Glasgow. It was just a great experience all round, playing with the big names of Adrenaline Mob, some of the finest musicians to ever grace the stage, playing in front of a sold out crowd, the atmosphere was electric and we got a great response from the crowd. It felt like we were apart of something big unlike any other gig we had been part of before.

11 What has been your worst gig experience?

Our worst gig was a few years back in the early days of the band held in a hotel in Luss. We were on the bill first followed by a rave two piece who had brought a busload of their fans with them and we were caught in the middle of it all. There were people covered in blood, people pissing themselves in the hotel reception, all sorts of things going on so it wasn't the best or most well matched gig we have been apart of haha.

12 If you could cover any song, what would it be and why?

There are a lot of great songs that we would love to cover but a favourite is Kashmir by Led Zeppelin. It's such an epic and powerful song so that one would be great to play, that or Black Dog.

13 What song would you like played at your funeral?

That's a tough question, at the moment for me it would be Wild Horses by The Rolling Stones, it's just a beautiful song and is just a great and fitting piece of music in my personal opinion.

14 What song would you/did you have as your first dance at your wedding?

None of the band members are married at the moment so we haven't had any first dance songs, I think that it would have to be down to both bride and groom to decide on a song for a first dance so I don't have an answer for that one haha.

If the EP is anything to go by, there's definately great things on the horizon for Mercury Underground
Posted by Unknown at 14:41