Band Of The Week - Wideboy Generation 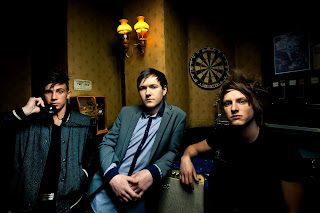 This weeks band of the week, are 3 twenty year olds from the North London suburbs. They've rocked more than a staggering 150 gigs in the last 9 month and, along with many others, I think they'll be playing a hell of a lot more, over a very long time. These boys are here to STAY!!

Wideboy Generation are comprised of Joe Finnigan on lead guitar and vocals, Jamie Wilsdon on drums and vocals ands last but by no means least is Aiden Eggenton on bass and vocals. Their sound is reminiscent of early Green Day, The Clash, and other riff driven guitar rock with attitude. There music is all self written,and there debut album No Time To Be Shy was released in May this year with stand out tracks including Sylvia,  and the title track No Time To Be Shy, although all 10 tracks could be considered worthy of single release.

Don't be surprised to see some very big things from these guys in the furture. They have the kind of energy, and enthusiasm for their music that will keep them around for a very long time. They're playing about 3 gigs a week at the moment, to get their music out there, then they have they day jobs as a way of funding their music. Their ultimate goal is to be able to jack in the day jobs, and do what they love full time, play music, entertain their fans, and party like rock stars. And from the evidence I've heard, I for one am not going to doubt that they will make it.

The album, No Time To Be Shy, was produced by a legend of the music industry, John Cornfield, who has previously worked with the likes of Oasis, The Verve, and Muse. The album is a must have and is available for download from iTunes

I'm certainly hoping the guys to play a gig up in Birmingham sometime, I'll certainly be there in a shot.